This autumn I’ve hugely enjoyed curating my 4-part Composer in Residence season at Handel House. It’s a lovely addition to workshop-leading and composing and working with other musicians in this way is always something I’ve loved. What I thought was really successful about this season was how the artists really responded to the atmosphere and character of the House.


First up I invited composer/artist Claudia Molitor to bring her brand of immersive, tactile work to the House. Along with pianist Sarah Nicholls, she installed all sorts of interactive, thought-provoking pieces all inspired by the idea of touch in music (using Handel’s blindness as a starting point), from video works to a triptych based around a paper cut-out score; embroidered notation – white cotton on white linen so you had to feel the score rather than read it; music created by eating (popping candy naturally being the highlight); and an exploration of the weight needed to play the main harpsichord, demonstrated through a lovely, slow-burning performance by Sarah and a load of pound coins! Most gorgeous to look at was Handel’s bed, festooned with a ribboning score, as if Handel was reclining there with all his musical ideas spilling out uncontrollably. 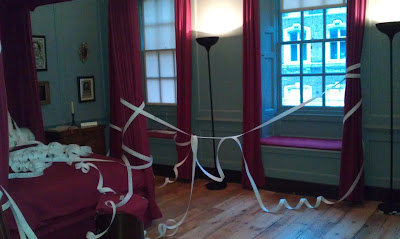 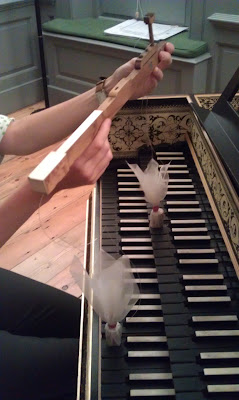 A week later, improvising demon Leon Michener, along with jazz bassist Olie Brice and wonderful singer Seaming To brought a sense of hushed spookiness to the House, focusing on Baroque-inspired improvisations, ghostly songs and tiny sounds wrought from the harpischord, Leon’s wurlitzer and clavichord, sometimes played with an e-bow. Seaming, who possessed a voice capable of whispery flutterings and near-operatic swells, was clad in a stunning high-fashion take on gothic Victoriana, and manipulated Leon’s homemade magic lantern music box to project abstract cut-outs suggesting insects and animals onto the wooden shutters. 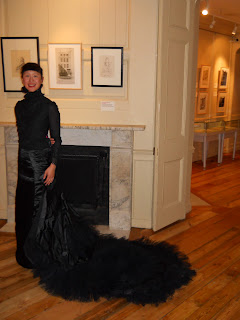 The RNIB’s talented young composers whom I’d worked with in July returned to hear soprano Juliet Fraser perform their solo songs – see my previous blog for details but here’s a photo of some of us! 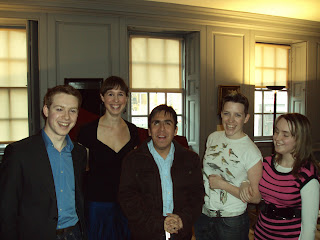 Finally, a heart-warming folk gig sent us rosy-cheeked into the autumn night. Olivia Chaney, a musician with an assured voice reminiscent of Sandy Denny and something of a Waterhouse’s Ophelia about her, sang mostly original songs self-accompanied by muted harpischord (for a lute-ish feel), Indian harmonium or guitar. Sam Lee, who had to dash off on his bicycle to present his own folk series up the road afterwards, had a similarly off-kilter edge with his travellers’ songs backed by violin, ‘cello, Japanese koto and shruti box. Sam has a wonderful way with words and demonstrated a love of the roots of his songs and a respect for those he learnt them from; he told us he thrived off bringing these rough-edged songs into our intimate, but formal, space. It strikes me that Handel’s rehearsal room is the perfect setting for some more acoustic folk…

Posted in Composer in the house by Sean Doherty on October 31st, 2011.