This term I have been working with primary school children at St Saviour’s Primary School in genteel Warwick Ave on Handel House’s annual opera project. St Saviour’s is my old stomping ground (my first job was teaching music there after my PhD), so it’s been super-lovely to revisit, and to work with a Year 5 class that were about half the size when I last saw them. Amazingly, I remembered most of their names!

This year, the London Handel Festival are performing the little-known Riccardo Primo (even Handel wasn’t that keen on it, and happily re-used about eight arias in later works). So we took this as our starting point and learnt a little about the plot (the usual mix of revenge, despair, fighting, love, etc) through a hilarious freeze-framing exercise. We also brought in a lovely singer from the Royal College, Bradley, who gave them a blast of one of baddie Isacio’s arias. I was impressed that the class of 9/10 year-olds were pretty knowledgeable about opera already, from being able to describe that a recitative was a bit like musical talking, to how opera singers sing more in head than chest voice. Blimey!

Since then we’ve been working on our own mini-opera, featuring Bradley and the class, and using the playground’s fabulous jungle/sea murals as inspiration. Cue lots of quite amazing ideas including a trained killer shark chorus, shipwrecks and fights with swordfish instead of swords. More professional operas should feature trained killer sharks! I took these ideas away and came up with a synopsis and simple libretto. This week the Year 5s composed, instinctively and rather brilliantly, I might say, a recitative for Bradley – or should I say, Bradley The Tigerclaw, King of the Land; they were tickled to hear it sung dramatically by him the next day. They also worked on some atmospheric, textural shipwreck music and a chorus, along with body percussion riffs, to accompany the fight scene.

I’ve now got to take their melismatic ideas – composed in small groups on glockenspiel – and use them in Bradley’s aria. Then we’ll work on some drama and get them decorating their sea or land animal masks. Can’t wait! 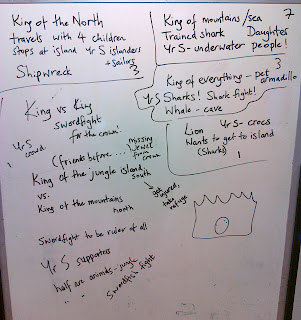 Posted in Composer in the house by Sean Doherty on March 23rd, 2012.