Home News ‘The Art of The Duel’ October gigs

‘The Art of The Duel’ October gigs

For two Thursdays and two Sundays in October, Handel House will be filled with DUELLING. I’m sure Jimi and George would approve. I’ve got us a MEGA-line-up…

Ellie and Tom are astounding violinists who perform across the world with the LSO, Puertas Quartet and Living Room London. They are also husband and wife. With a programme exploring the balance and infinity of ground bass, a duet may become a duel. I’ll be there with voice and harp to mediate and agitate.
LSO Soundhub composer feature : Richard Bullen
Thursday 17 October
He is a master of making use of performance space to heighten perception of sound, structure and the drama inherent in the musical material. He is writing a piece especially for us in the spacial acoustics of Handel House.

Hugh ‘Crewdson’ Jones is a prolific inventor and who performs with Matthew Herbert. He has created an electronic concertina inspired by the subtlety of acoustic folk instruments. The ‘Concertronica’ will sample and manipulate my harp to create modern British folk songs. The duel of electronics and acoustics will be so entangled, you will not know where one ends and the other begins. His exquisite inventions will be exhibited on the same day, with an interactive demo from the maestro himself.

LSO Soundhub composer feature : Robert Szymanek
Sunday 20 October
He’s a composer, singer, songwriter and producer with a thirst for the eclectic. He’s creating something especially for this event, and at present it’s TOP SECRET! 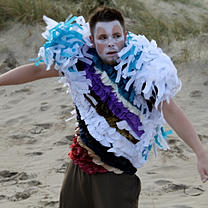 Thursday 24 October, 6.30-7.30pm
Chris (of Troyka) is a virtuosic guitarist described by Jazzwise as ‘one of the most imaginatively skilled young axesmiths on the London scene’. In this concert, he will battle blues, Baroque and memories and emotions will be captured in ‘Pandora’s music box’ (which I’m making).

What if Eve were a codebreaker, who resurfaces throughout time, with different names, different faces? A duel of storytellers in music, eager to claim their version of Eve as the best: Björk’s percussionist Manu Delago versus Red Priest’s harpsichordist David Wright; Cellist Gregor Riddell against Bel Canto singer Nina Horrocks-Hopayian. Accounts of Persephone, Pandora, and even Alan Turing may become ammunition. For the first time, this duel pits one of the newest instruments, the hang (and its leading virtuoso) against Handel’s weapon of choice. Whose tale will triumph? The Eve of Battle is a world-première commissioned by Handel House. LSO Soundhub composer feature : Raymond Yiu
Sunday 27 October
It’s such an honour that this award-winning composer it writing especially for my collaborative oratorio. He’ll create a cello piece for Chang’e, the Chinese moon goddess, to form one of the Eve tales in our battle.

Posted in Composer in the house by Sean Doherty on August 4th, 2013.